Note about our early work: Lisa and Katie met in Austin, TX in 1996, where Lisa was just leaving after finishing her graduate work in playwriting at the Michener Center at the University of Texas, and Katie was just arriving to direct plays for Physical Plant Theater. After our first collaboration (The Grove), we’ve almost never lived in the same city at the same time, and instead travel to each other’s hometowns where we dive in for short, intensive creative sessions that ultimately lead to performance. As a result, we have multiple performance homes—primarily Austin, New York City, Minneapolis, and New Orleans.

Slow-evolving tableaus in a grove of trees on the side of a busy road.

1997, Austin. Our very first collaboration—we had just discovered a shared interest in site-specificity, and Katie pointed Lisa’s attention to a particular grove of trees on the side of Lamar Blvd, one of Austin’s primary commuter routes.  Katie was convinced that people drove by the grove every day without actually noticing it, so we decided to make a 14-hour installation in the grove designed to be seen by the occupants of passing cars.  In creating the slow-moving tableaus, our creative conundrum was:  what can we design that will make people notice not what we’re doing in the grove, but the grove itself?  (Thanks to Kim Rubinstein who first helped us articulate that question.)

We started the piece at dawn with our good friend Dave Fruchter and carried on through dusk.  The pictures here show only one event during the day, when our friends from physical plant theater joined us with all sorts of white sheets. The highlight of the day was at noon, when about 40 people showed up to take a gigantic nap.  The post-nap was beautiful:  people exiting the grove so slowly they seemed to be almost standing still, trailing pillows and blankets.   The low point of the day?  Our volunteer performers standing on the curb waving at the cars driving by! Photos by Bret Brookshire.

A 50 minute, 3-part performance tour hosted by the Blue Dress Lady in an empty, odd-shaped boutique.

1997, Austin, as part of Fronterafest.  This piece represents the real beginning for us, and uses many of the qualities, tactics, systems, and aesthetics that show up in our work today.  Lisa played the character The Blue Dress Lady (who first showed up in The Grove, walking with her red umbrella): an odd and gracious hostess who tours people through her “home” even as she is falling apart in front of them.  Narrative content (optical illusions, missing sisters, clouds and birds) mixes with real aspects of space (the skylights, the window into the bridal shop next door, ceiling fans) to create a picture of a woman whose interior psychology is expressed by her exterior architecture.  With the help of our 3 Red Dress Girls, we made our first and very successful foray into asking our audiences to participate in the mechanisms of the performance—on invitation, they very happily looked through giant eyeballs, pretended to go bird watching, and ate snacks.

Critic Robert Faires from the Austin Chronicle said this about Dress Me Blue:

“Lectures about optics and interactive demonstrations of optical illusions embellished this meditation on loss by Lisa D’Amour and Katie Pearl. Through these simple theatrical flourishes and the touching gentility of D’Amour’s guide, we learned to see loss from someone else’s perspective, through their eyes, and it was a revelation.”

Our 2007 Bird Eye Blue Print is a re-making of this piece. Photos by Bret Brookshire. 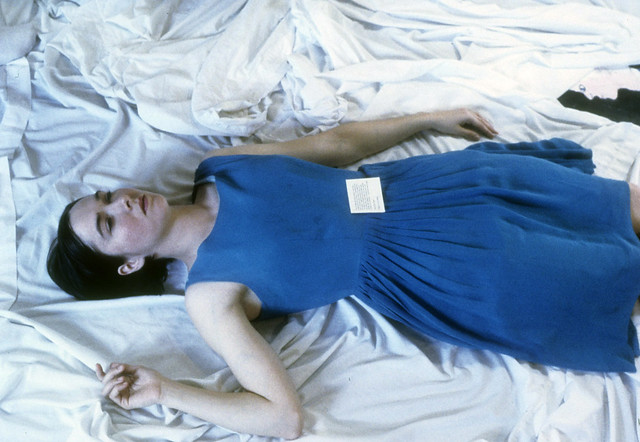 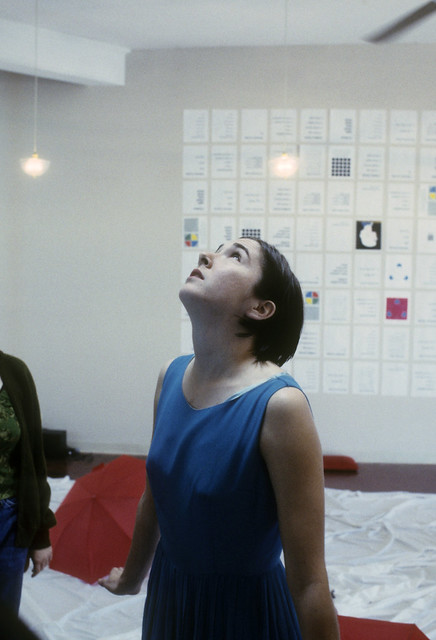 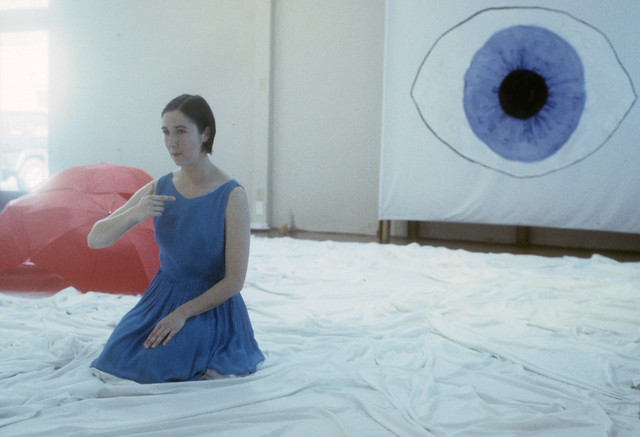 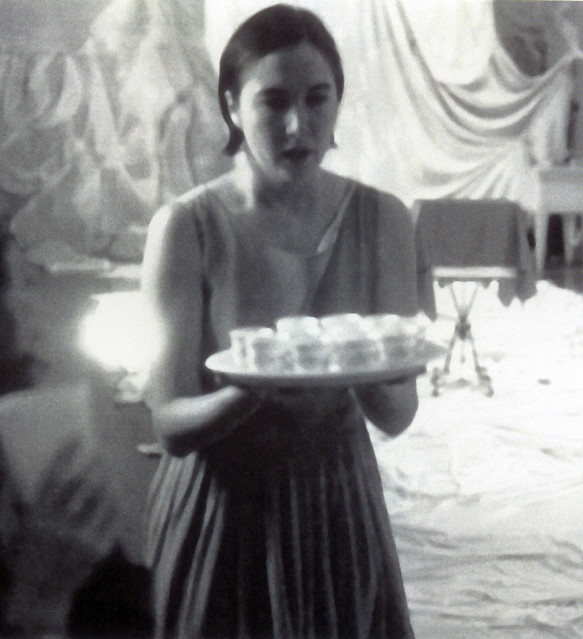 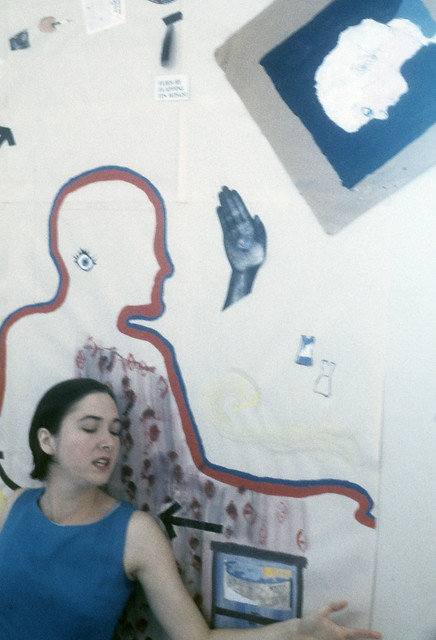 A trilogy of short plays about mutant girls.

This trilogy was written by Lisa, directed by Katie.  Monique the Mosquito Takes First Runner Up details the trials and tribulations of the brief lives of Mosquito Pageant Queens.  Dream of a West Texas Marsupial Girl presents a dream-portrait of a young Texas girl born with a pouch.  A U T O P S Y is a theatrical mash-up of femme fatales, mothers’ milk and brain-dead baby girls.

Produced by Rachel Fleit / Ithaca College at the State Theater in Ithaca. 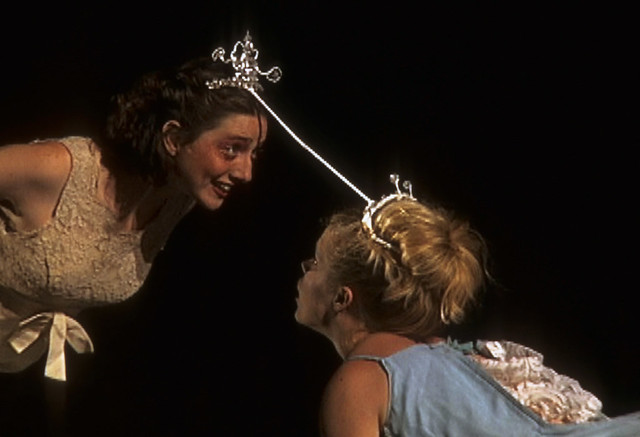 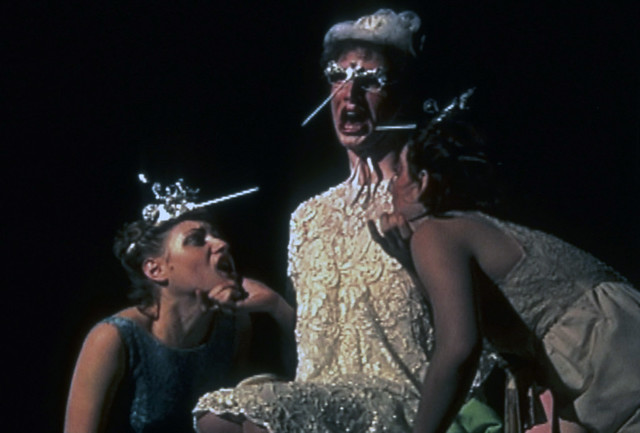 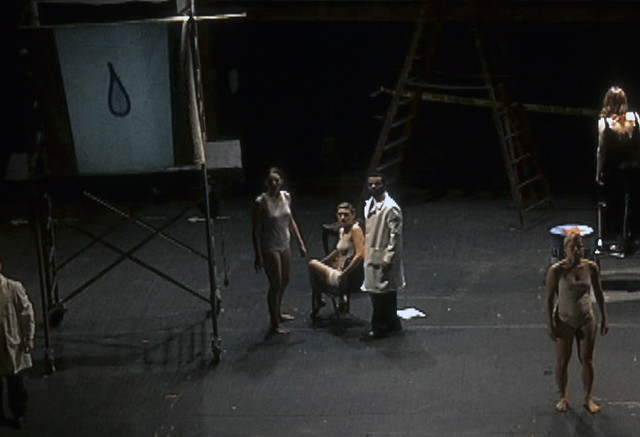 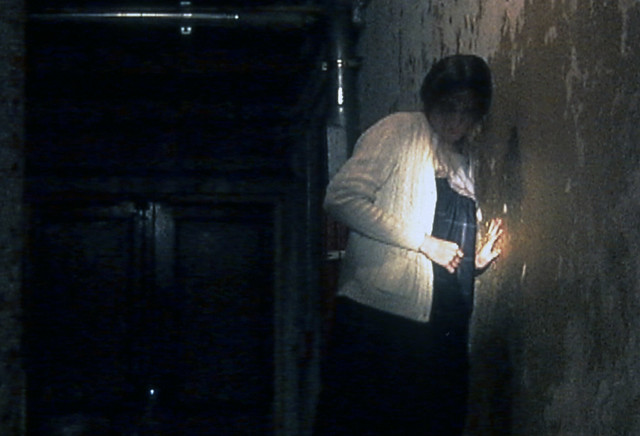 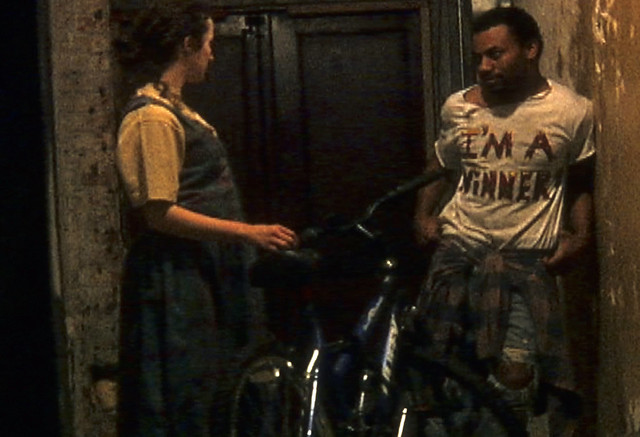 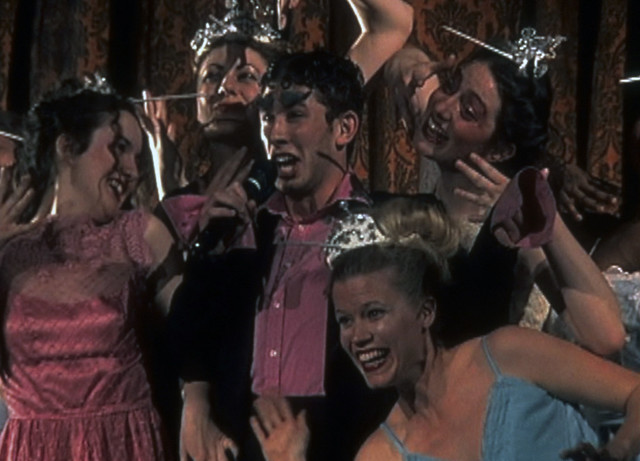 A site-specific performance in a multi-level parking garage

It costs 25 cents every 15 minutes to stay at this sprawling, 3 level exploration of Heartland Garage. The friendly and strange parking attendant puts you in touch with the “long-termers” and “short-termers” who inhabit the garage:  the woman who can’t find her spot, the runaway, the skateboarders, the couple making out in their van, the frustrated musician.  Audiences carry their own ‘sit-upons’  as they travel the levels, sometimes walking and sometimes being driven by the performers themselves.   An interesting thing we discovered was that we were making a performance in a place that was specifically designed not to support human interaction.  How could we use that quality to inform our decisions?

Our playwright friend John Walch invited us to make this project with him back in the “anything is possible in Austin” days of the late 1990’s. 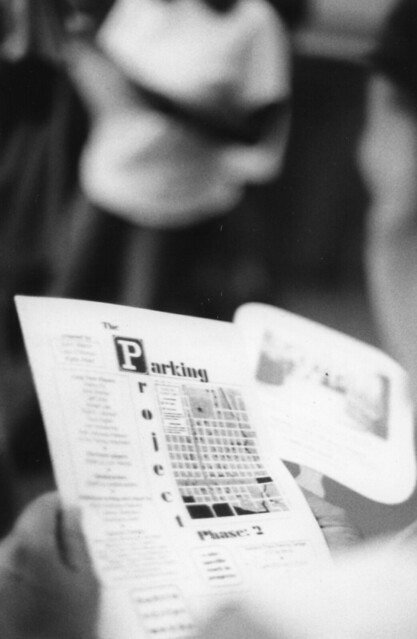 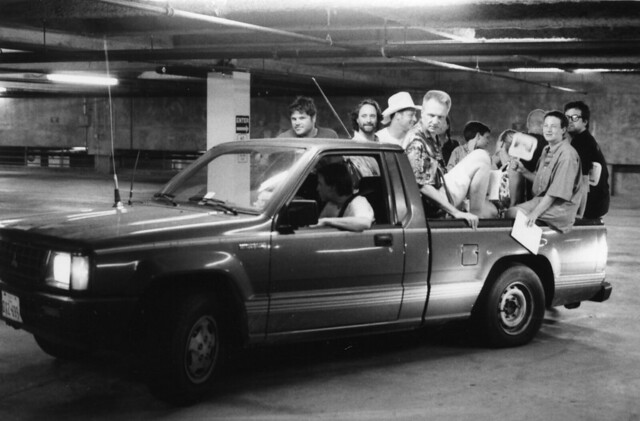 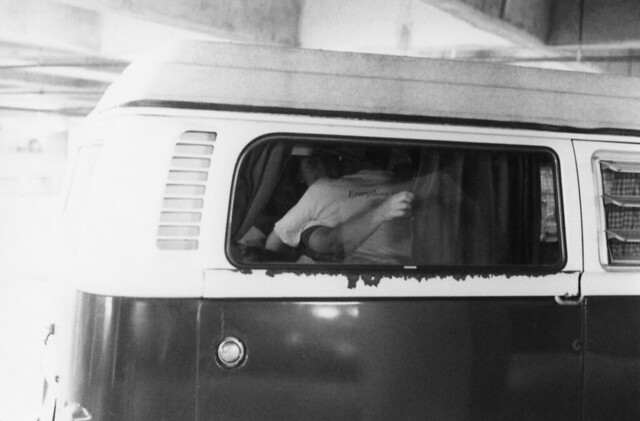 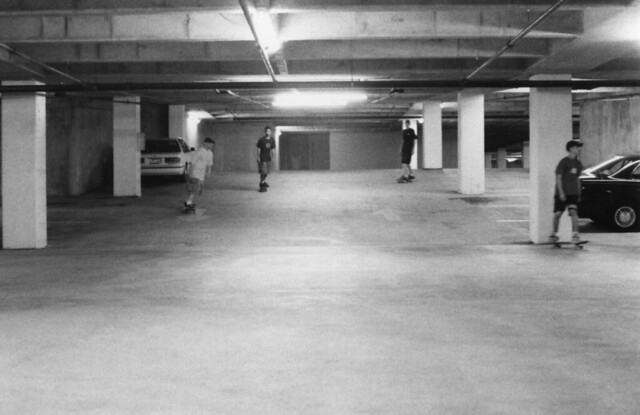 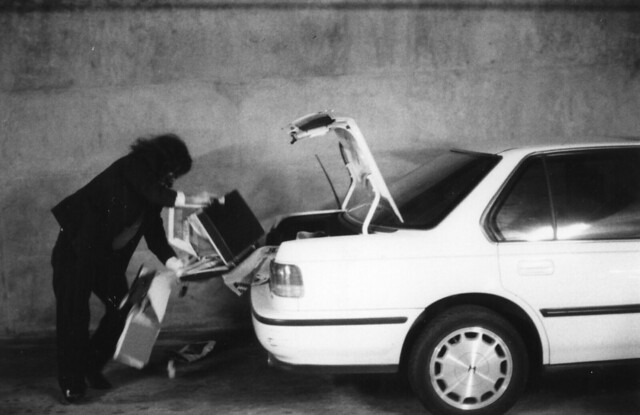 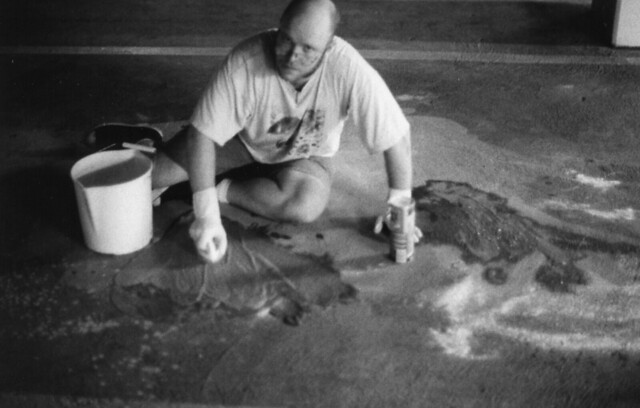 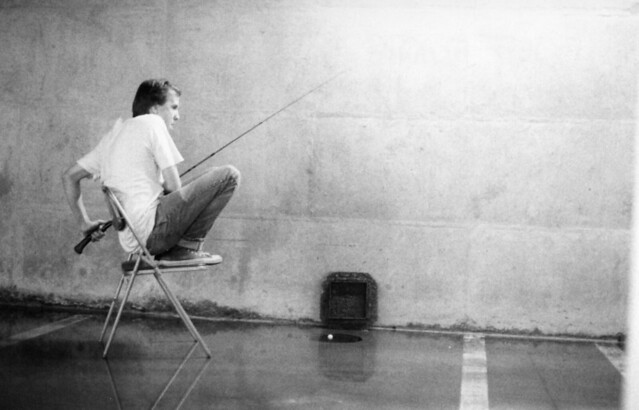 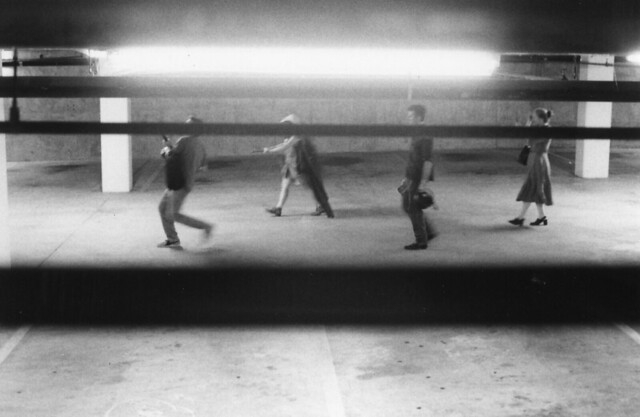 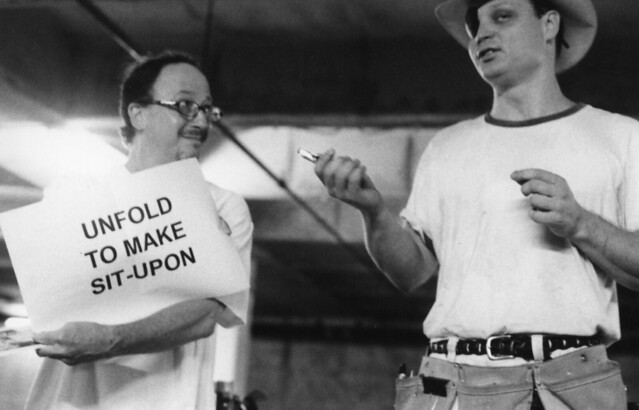 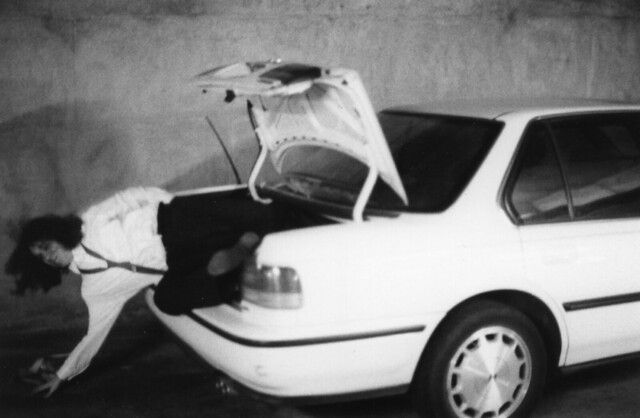 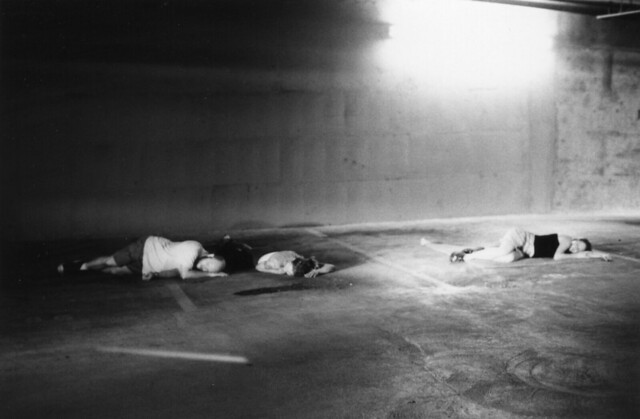 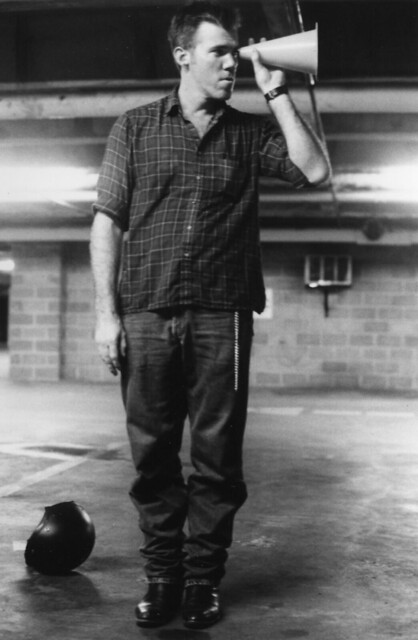