How to Build a Forest

Premiered at The Kitchen in NYC in June 2011, subsequently toured to Duke, Vanderbilt, and Brown Universities and the Contemporary Arts Center in New Orleans

Part visual art installation and part theater performance, How to Build a Forest unfolds over 8 hours. Beginning on an empty stage each performance day, the forest comes together in ways that range from surprisingly intimate to large-scale and spectacular; in the premiere production it ultimately filled the Kitchen’s black box from wall to wall and floor to ceiling (30’x 40’ x 22’).  After the 6 hour build, the forest is “complete” for a mere 30 minutes before disassembly begins.  Audiences are invited to come at any point during the build and stay for as long as they like (watching from seats or watching from inside the installation itself) until the end of the 8 hours, when the forest has disappeared once more. The work features sound design by composers and sound artists Brendan Connelly and Christopher DeLaurenti and lighting design by Miranda Hardy and Peter Ksander. 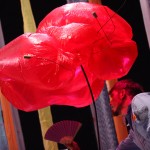 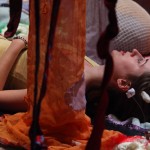 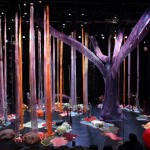 all photos of the NYC premiere by Paula Court, copyright 2011

How to Build a Forest was funded by Creative Capital, MAP, the Irving Linn Fund, the Moore Family Fund for Minneapolis, hundreds of individual donors, and the support of friends, family, and fans throughout the U.S.  For our Ogden show, we work in cooperation with Tulane University,  and we will be touring to Duke and Brown universities in 2012/13.

How to Build a Forest is a hybrid project: part visual art installation, part theater performance that unfolds over an extended interval. Beginning on an empty stage, the forest comes together in ways that range from surprisingly intimate to large-scale and spectacular:  builders whisper quietly to their trees as they magically grow them up towards the sky; a huge structure is hauled up by many lines of rope to become a giant tree reminiscent of a live oak; many balance balls are pumped with plastic pumps and create a chorus of strange frog-like sounds.

Hall’s intricate installation emphasizes weightlessness, translucence and transformation; the environment will feel like an old growth forest at one moment and a deep-sea landscape the next. Her primary materials are fabric, wire, small-gauge steel, and repurposed found objects. To be sure, sheer grandeur is a considerable part of the work’s appeal, but there is also striking beauty in its small details, such as a grove of delicate fabric trees featuring exquisite hand-sewn detail that can only be seen from inside the installation.

The construction process demands constant activity and unrelenting focus from the artists and workers. For the mere 30 minutes the forest is complete, they make an inevitably futile effort to animate it. When they fail, they take the installation down.

While the choreography of the build is the core of the performance, other events punctuate and expand it. In our NYC premiere, the audience could choose to take a self-guided tour that led them through the installation and out on to the High Line, or join Todd Shalom of the conceptual walks organization Elastic City on a small guided walk through the forest.  In every city, short texts by Lisa D’Amour and compositions by Brendan Connelly weave through each hour of the build. An extensive “field guide” tracks the lineage of every material used to build the forest: where it came from in the earth, where it will go once the artists are finished using it. Finally, the audience themselves become performers, as they move through and make themselves at home inside the installation. Together, these elements invite contemplation about the audience’s relationship with the natural world: How they live in it, rely on it, use it, and use it up.

How to Build a Forest was conceived, developed, and built in New Orleans, where PearlDamour, Hall and the build team live and work. How to Build a Forest was initially inspired by the loss of 100 old pine trees on a piece of property shared by Lisa’s extended family during Hurricane Katrina.  Soon after, larger environmental issues brought to light by the storm began shaping the piece; the team was in the thick of developing the installation when the BP Oil Spill occurred in the summer of 2010. The artists became acutely aware of the often-invisible human-driven processes that make New Orleans more vulnerable to hurricanes and extreme environmental crisis. In How to Build a Forest, the artists make their creative and destructive processes visible and accessible, in order to examine how our lives are intimately tied to the fragile natural world.